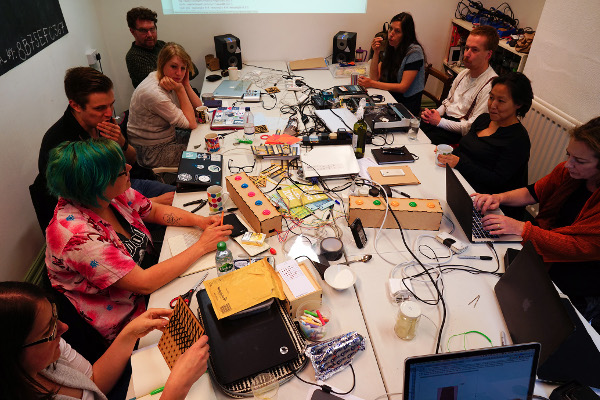 Digital Media Labs was one of the major inspirations for Inhabiting the Hack, and so we were very happy to include one of their residencies in our programme. In the words of one of the organiser-curators of the hack, Benedict Phillips:

After the success of Digital Media Labs 2014, it seemed inevitable that there would be another one and with the support of new project partners, Inhabiting The Hack and the Communities and Culture Network+, our 2015 edition ‘Digital Outsiders’ came into being.

With the third iteration of Digital Media Labs, we created a conceptual structure around the theme of the ‘digital outsider, providing a starting point or provocation for the participating artists to explore if they wished. The concept of the 'digital outsider’ first suggests the question of 'are you on the outside or the inside?’. Thinking about the notion of the digital outsider for us was about taking a distinctly personal perspective from which to examine the digital world and that which is thought of as being 'outside’ of the digital. Are your ideas digitally inclusive or digitally exclusive?

Digital Media Labs is a focused opportunity for professional artists from a variety of career stages to reflect upon how they present their ideas, how they communicate these to others and how they deal with those ideas when challenged. It is an opportunity to forget who you are, with many of the day-to-day responsibilities and barriers that impinge on making work removed. We are interested in what happens when artists have the normal restraints removed and have to battle through the uncertainty of being able to do whatever you want.

We have often found that Digital Media Labs can generate a lot of questioning and disorientation within the artists who take part. But from our experience, it is only from this point of view that you can start to find your way out. As we say at the Lab: 'If you’re not lost, how are you going to find yourself!’

The project was made possible with support from Arts Council England, Communities and Culture Network+ and Octopus Collective.